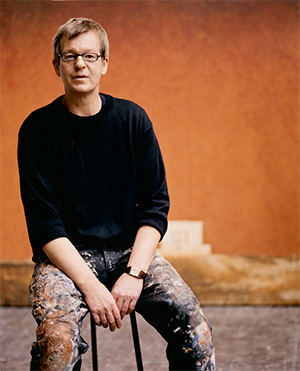 In his early years Uwe Hand painted trompe l’oeil still lifes, fascinated and inspired by baroque, Netherlandish paintings in a manner unique to him, for his paintings were both autobiographical and loaded with socio-political allusions. Already in those works motives becoming typical of his later work can be seen like the recurring subject of a house for example.

The work entitled „Abdication“ literally marks a temporary endpoint of his naturalistic painting style in 1992 when he fell into a creative crisis. For this portrayal of a teddy bear seated in the shadow of a dramatically lit ladder, Hand found neither a suitable successor nor a plausible method of continuation. As a result, in 1998, he resorts to an almost monochrome abstraction with extremely detailed surface treatment. These large format paintings clearly stem from a time-consuming process despite their inherent eruptive force. After all, Uwe Hand never paints more than eight paintings per year and rather destroys work he deems unsatisfactory than making any artistic compromise. Thus not only the artist’s hand but also time has left indelible traces in each painting.

The gestural structures of his often very heavy canvases are composed of countless layers of color and material that have been worked with all kinds of painterly substances and instruments demanding a high physical effort. Hand vehemently paints, pours and rakes oil and acrylic color, layers of pigment and sand onto the black primer of canvases laid out onto the floor. During the process he scrapes off parts of these layers leaving behind deep, crusty wounds in the skin of his paintings, which are levelled at the end to the effect of still being visible as scars while not forming impasto surfaces. Highly condensed, the work provokes in its immediacy an overpowering structure, which throws the viewer back at himself and leaves him hardly any possibilities of distancing himself. Even if his works were aesthetically close to the material and structure paintings by Jean Dubuffet, Jean Fautrier or Antoni Tapies, Uwe Hand’s technique is not really comparable to that of the before-mentioned artists but quite unique.

From the turn of the millennium, his paintings are closer to the old masters of film and photography than to classical painting. You can clearly see a tribute to Alfred Hitchcock, Andrej Tarkowsky, Jeff Wall and Gregory Crewdson. The most important reference point, however, is to this day David Lynch.

2015
Between man and nature, Till Richter Museum – Schloss Buggenhagen, Germany
Zoo, Udk, Berlin, Germany
From B. to A., news from the capital / Von B. nach A., neues aus Hauptstadt, Peters-Barenbrock Gallery, Ahrenshoop, Germany