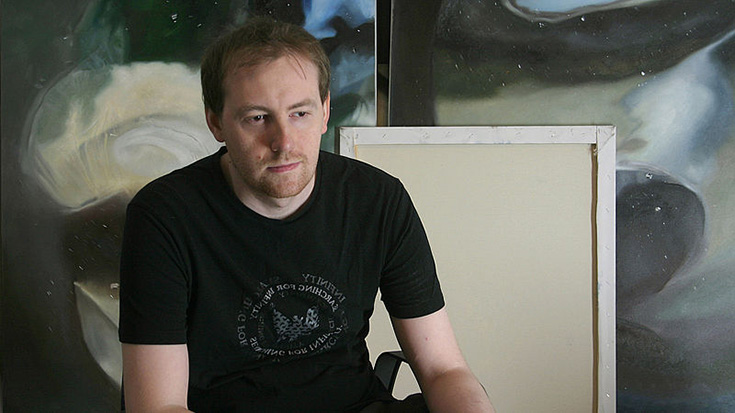 I was not sure what to expect, but 1000 self-portraits in brisk succession made it clear that the synergistic combination of the painting and the personality of the sitter were not to be under-estimated. An unexpected variable showed up in the judging; it was difficult to avoid making value judgments based on what you could infer of the sitter's character, something that would not normally be so available. Sometimes an uncomfortable position; should crazed narcissists be penalised? Is raw expressionism a bold choice or evidence or imbalance? I was wary of pieces that seemed to be an assertion of ability or good taste or good judgment. And mostly, we were in agreement. We saw many pieces that somehow carried not enough of anything but sophisticated technique. We also viewed pieces that were screaming with necessity, but hard to look at. And terrific pieces that just needed to be sent to a different competition; they were not helpful as self portraits. My own position was that I wanted to reward pieces for taking some sort of risk. Something had to be at stake that required an act of faith from both the artist and viewer. We also tried to awoid giving finalist positions based on the size of the piece. We all agreed this was a familiar approach to giving a painting presence, like making an enormous pancake. But it was inevitable, somehow, that the larger pieces were more ambitious and provided tougher challenges to the painters I could not avoid bringing in my own experience in dealing with larger works: they are generally more difficult to manage and resolve, and you need to have an excellent reason to justify the acreage or it all goes a bit "blowzy”. And all the judges were unanimous on the winner, which is telling in itself. We were very consciously aware that many of the factors that made the portrait such a clear favourite meant that we were choosing a piece that was making use of fairly well understood and mapped-out territory. But the psychological force of the picture transcended that. I think we were all looking for something that delivered a human punch that could not be tied to some academic process, where the paint-handling and the image worked together in a way that was outside of the nuts and bolts of pure craftsmanship. Mostly, I was struck by how much of the polished work seemed ineffective or leashed, but then further surprised that almost all of the finalist were able to use technical refinement to carry real and singular information. It was almost disorienting to see so many different and often deeply personal and personalised approaches. My own experience is that artists learn most commonly from looking at other artists' work, not so much in terms of technique but, more importantly, in reminding them of the unbelievably varied approaches that are available. It is often necessary to block out many of the available choices in order to concentrate my attention on some aspect I think worthwhile. But this excludes some radical and thrilling solutions; it was a constant surprise to see some of the ingenious and admirable solutions on show.  The winner itself was almost two separate pieces, one astonishingly controlled - almost neurotically faithful to the reference, but the second (and it seemed to me there was an incomprehensible gap between them) was the human reality of the sister’s presence.

"The Royal Society of Portrait Painters has launched SELF, a new £20,000 prize promoting the practice of self-portraiture. The winning work was a bleak, photorealistic piece by Jan Mikulka, a contemporary painter living and working in Prague.

Charlotte Mullins, editor of Art Quarterly and a judge on the prize, says: "This self-portrait draws you to it through its technical proficiency and expressive power. You feel you are standing in front of the artist, watching him concentrate on his likeness - his eyes hooded yet determined, his lips pressed together through concentration."

Mikulka previously won the Visitor’s Choice Award in the BP Portrait Award in 2011 for this similarly piercing image of his longtime friend, Jakob."