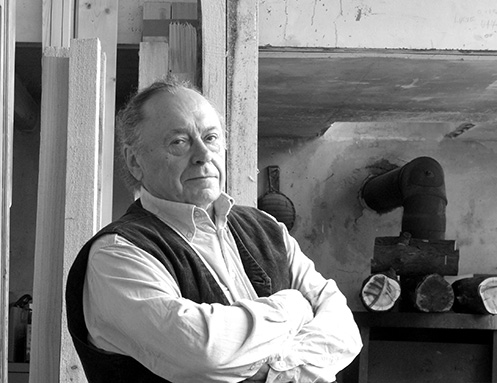 Jiří Hilmar was born on 28 May 1937 in Hradec Králové. He made a name for himself as a founding member of the Concretists’ Club, which he co-founded together with Tomáš Rajlich, Radek Kratina, Miroslav Vystrčil and art theorist Arsén Pohribný in 1967 in Prague’s Kampa. Due to the political situation in 1969, Jiří Hilmar left Czechoslovakia and developed his artistic position in exile – at first in Frankfurt and Munich, and from 1974 in Gelsenkirchen at the artists’ colony “Die Künstlersiedlung Halfmannshof”. His work was soon integrated into the local art scene and was reflected in a series of group and solo exhibitions. One of the important ones was a major exhibition at the Museum in Bochum in 1973, where Jiří Hilmar was presented together with František Kyncl and Tomáš Rajlich. His work has been repeatedly exhibited also in prominent private galleries such as Hans Mayer Gallery in Düsseldorf and Walter Storms Gallery in Munich. For years Hilmar’s art was followed and analyzed by Arsén Pohribný. Hilmar’s work was also reflected on by other distinct art historians and curators active in Germany: the Czech ones included Petr Spielmann and Zdenek Felix; the German theorists included, for example, Sepp Hiekisch-Picard; and in Czechoslovakia it was in particular Jiří Padrta.

In 1983 Hilmar co-founded the artistic group Die Gruppe Gerade and from 2005 to 2008 he collaborated with the University of Dortmund. Hilmar’s oeuvre began to reappear in Czechoslovakia shortly after the Velvet Revolution. His first exhibition took place in 1991 in Prague’s Opatov Gallery, other exhibitions followed in the House of Art in České Budějovice, Nová síň Gallery and Topič Salon in Prague, and the Gallery CZ in Brno.

At the time of founding of the Concretists’ Club in 1967, Jiří Hilmar concentrated on the theme of movement, both real and optical, which he followed in kinetic objects and optical paper reliefs. In addition to mechanical “gadgets” aimed purely at the possibilities of machine movement, there were objects working with a light source which after being put into operation created effects of changing shadows. The paper reliefs are based on optical phenomena. They are made of cracked and cut paper, which at first sight forms a regular structure. In order to “read” these reliefs the artist, from the very beginning, counted on the active participation of the viewer who will pass by these works. Here the kinetic nature of object-machines has been replaced by the real movement of the viewer and the optical effects emerging within the area of the work.

During the 1970s, Jiří Hilmar began to use other materials in addition to paper and cardboard such as string, fabric and wood, while utilizing their qualities relating to meaning in language or logic. He gradually arrived at increased distortion and softening of the rectangular order. The strict rationality opened to a dialogue with emotionality. This resulted in a set of reliefs consisting of two systems of vertical strings, one layer of which is firmly fixed to the base and the other which hangs loosely over it in another spatial plan. The static work, which can be set in motion by a draft created by a passerby, conceals latent movement. At the same time, Jiří Hilmar also produced works based on the layering of transparent paper, which he mounted on canvas and board. Like soil forming deposits, like human experience which sets down in layers over the millennium, Hilmar covered the underneath area with almost intangible paper plates, which the viewer is able to distinguish only at those places where one of the layers is wrinkled, perforated or peeled off. These sensitive monochromes represent the next stage of the dialogue between a work of art and the viewer. A direct relationship between the optical relief and the viewer based on the evocation of the above-mentioned visual actions is here replaced by a psychological situation, in which the viewer is brought to a state of quietness and maximum concentration.

From the mid-1970s on, Hilmar increasingly focused on issues of nature and the threats to it posed by the technical civilization. Direct confrontation with the devastated landscape in the heart of the in¬dustrial Ruhr area, where Hilmar moved in 1974 from the virgin nature in Inning am Ammersee near Munich, reinforced the artist about the importance of balance between man and nature, the need to strive for their disrupted unity and harmony. In this context Hilmar began to make wooden objects. He took wooden planks cut from a tree trunk and tied them together by a string, connecting and sizing them into a new whole. He fixed a split wooden block by putting a missing part into it and polished the whole into the shape of a fetus. Deconstruction passes into construction, the principle of the human power (creative work) merges with the principle of the power of nature (growth).