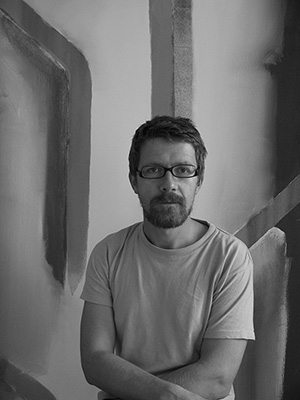 The painter of “passionate still lifes” Vladimír Véla is inseparably linked with the phantasmagorical Bohemian Paradise landscape and memories of his birthplace area and home in Turnov, filled with banal yet mysterious objects. This intrinsic affinity with nature runs in his genes, since his family has practiced hunting for generations. From there stems the root of Véla’s woodland imagery, as one can see from the depicted forest cratches (Hollow I, 2011), antlers or tree stumps (Salt Cellar I, 2014) and the predominant blue-green colour scale. However Véla’s aim is not simply to mirror these miracles of nature. He is focussed on the process of capturing the subliminal “feeling matter” of experience.  To this aim he is aided by his refined painting technique.

By its very nature Véla’s work defies categorisation. The fragments of artistic styles scattered throughout his work are subject to distinct transformation.  As a result they are apparent only by association and when interpreted it is key to retain a playful point of view.  Véla,  is more inclined to declare an affinity with the legacy of the masters of European art (Rembrandt, Goya, Poussin) than with current trends and finds great inspiration in classical music (Mozart, Dvořák, Ligeti, Scelsi)  with which he feels a great kinship thanks to its immediacy. He follows in the footsteps of Kandinsky in his search for harmonious accord at the receiving-aesthetical plane of his work and believes that the actual conception of the image should resonate with the perception of the recipient. Nonetheless, certain impetuses of Véla’s work can be found in its expressionism, intuitive automatism, meditative lyrical abstraction and spirituality and allegoricality of sacral art. Pervasive rounded biomorphic shapes with soft edges may, for example, bring to mind the surrealist works of Miró or Arpov, or even the abstract expressionism of Baziotes and Rothko or Kandinsky’s spiritual paintings.  However, Véla aims to defy stereotypical interpretation based solely on external similarities. His transformation of stimuli from the history of art as a whole is reflected in the play on the conventional symbolism of objects, shapes and colours, which in the spirit of Magritte, thanks to its intrinsic connection to linguistic constructions appears unreliable and arbitrary.

Véla’s paintings attempt to revitalise the relationship between the world of objects and the subject of art through regression to naivety and fantasy. As a result, they often defy logic and intent and strive, as Rothko once did, to attain maximum sensuality – to activate the priomordial language of perception of the world. This also ties in to Véla’s reflection on the phenomenon of balance, which bears aspects of Klee. Twisted Voussoirs (Voussoir I-VII, 2013), Unstable Struts (Struts I-V, 2014), Rickety Cratches (Hollow I, 2011) and Hybrid Levels (Water Level, 2011) negate the laws of physics, yet they form a reference for intuitive interpretation and are the supporting frame for the compositional structure of the paintings. The search for an equilibrium between the painter’s inner vision and the external physical reality is best reflected in the metaphor of communicating vessels (Communicating Vessels I, 2012).

The two-time finalist of the NG 333 award Vladimír Véla (*1980) lives and works alternately in Prague and in Turnov. He studied at the Academy of Applied Arts, first at the Studio of Classical Painting Techniques under Zdeněk Beran, thereafter Intermedia Studies under Milan Knížák. His art work is widely exhibited at exhibitions in the Czech Repubic, he has also exhibited work in Germany and the USA. He is represented in collections in the Czech Repubic and abroad. Véla, together with David Pešat and Ondřej Maleček form the art group EX. Besides painting he also devotes himself to teaching art.